You guys, this song is really good. Calvin Harris, the electro-dance producer (and recent Taylor Swift flame), decided to team up with two completely different artists in the introspective and ingenious soul-singer Frank Ocean, and Atlanta trap-rap kings Migos, who are currently basking in the spotlight with their chart-topping single “Bad and Boujee.” “Slide” features an unexpected collision of worlds, but it ultimately works in the best possible way. Harris’s silky, shimmery beat is an immediate earworm — I can already picture it setting the mood for some laid-back July barbecues.

Frank Ocean is the song’s anchor, and I love when he drops the pitched-up “I might!” during the verses as the beat drops out. But my favorite part is the verse by Offset, one of the two “Migos” that appear. His fast flow punches the track up a notch, bringing it from “really good” to “great.”

I was a fan the first time I heard “Slide,” and my love for the song has only grown each time I’ve listened. Now we don’t have to wring our hands over what the 2017 “Song of the Summer” will be. We have it locked in, everybody can go home.

END_OF_DOCUMENT_TOKEN_TO_BE_REPLACED

For those who don’t obsessively peruse music blogs, “poptimism” is a strain of music criticism that celebrates top-40 pop music and the mega-stars that bring the hits to life. Music magazines, websites, and publications such as Pitchfork and SPIN rose to prominence through their celebration of punk, indie, underground rap, and other genres far from the mainstream, dissing the vapidity of chart-topping hits along the way. But over time, pop has overcome its stigma. “Poptimism” has thoroughly permeated the ends of the blogosphere, to the point that praise for the likes of Taylor Swift, Beyoncé, and Carly Rae Jepsen has become the modus operandi of most music criticism (see the links on each name for examples). The fact that Pitchfork bestowed its #1 song of 2013 to “Hold On, We’re Going Home” by Drake, perhaps today’s biggest pop juggernaut, would have been unheard of a few years ago. It’s no longer an embarrassing display of naiveté to love “Call Me Maybe” or “Teenage Dream” — it’s a sign that you’re an impartial judge.

With the release of Ryan Adams’s cover of Taylor Swift’s behemoth of an album, 1989, we have officially reached “peak poptimism.” We are now in a society where there is no such thing as a guilty pleasure. If someone like Ryan Adams had covered a Kelly Clarkson album ten years ago, I guarantee it would have been a completely ironic exercise. The culture was just not one where the critically acclaimed underground mixed with the pop stars. But today, in an age where poptimism reigns supreme, Adams can talk about 1989 in an interview and say, with total honesty: “These songs are incredible. You break them down from what they are to this raw element, and they’re just super powerful and they can tear you up.”

END_OF_DOCUMENT_TOKEN_TO_BE_REPLACED 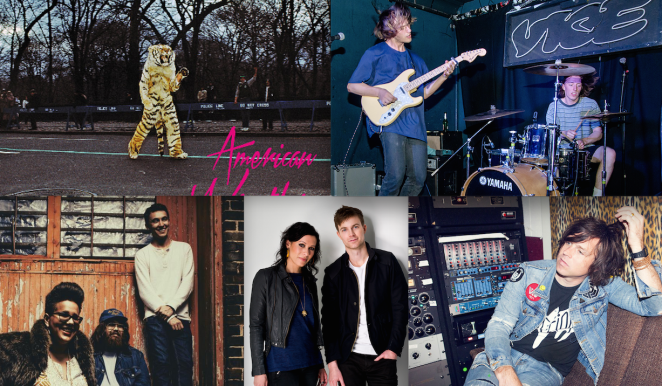 1. American Wrestlers: “I Can Do No Wrong”

This band took me completely by surprise. “I Can Do No Wrong” is reminiscent of a lot of indie pop/rock out there, but it’s more nuanced and invigorating. The song seamlessly weaves three different kinds of guitar sounds together — gritty guitar chords, jangly guitar arpeggios, and an acoustic guitar backdrop. The part that takes this song from “really good” to “great” occurs at 2:17, when the “gritty” guitar stops, leaving just the beautifully upbeat, acoustic guitar chord changes and a drum machine. The singer comes in with a catchy melody, and the rest is history. It’s a perfect slice of mid-2000’s-style indie, but with a twist that makes it wholly modern.