The Similarities Between Kanye West and Kobe Bryant

I’ve pored over the similarities between the hip-hop royalty duo of Kanye West and Jay-Z and the Miami Heat’s Big 2 of LeBron James and Dwyane Wade. Then it hit me that, individually, Kanye would be more appropriately compared with Los Angeles Lakers’ veteran Kobe Bryant.

Now, hear me out before you close the page in disgust. Full disclosure: I am a Laker fan — but this is by no means a love letter to Kobe Bryant, or Kanye West for that matter. This is an objective comparison between two influential people, occupying different sides of the entertainment world, but possessing uncanny similarities, both positive and negative. Here are 9 of them.

1. They are despised by a significant portion of the population. 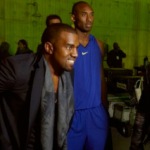 It’s well-documented that Kanye and Kobe are both very polarizing figures. They are accused of having huge egos, while failing to be outwardly friendly or sociable with the media. There are polls and Facebook groups that mince no words in proclaiming hate for Kobe. One blogger from the Hoop Doctors aggregated reasons for this hatred from various emails he had received, pointing to his cockiness, his penchant for trash talking, and self-absorption. Even (or should I say, especially) his hometown of Philly hates him.

If Kobe Bryant’s ego is big though, then Kanye West’s is gargantuan. His lyrics are full of self-aggrandizement and he often says and does really brash and controversial things, such as accusing George Bush of not caring about black people or comparing the hate he receives to that of Hitler.

But these reasons for animosity are all minor when compared to other incidents, which leads me to…

2. They each have one defining moment in their past that solidified the public’s hate.
For Kanye, it was the infamous Taylor Swift incident at the 2009 VMA’s, which even drew a rebuke from the President. For Kobe, it was the charges of rape brought against him in 2003. The charges were eventually dropped, but the scar of infidelity still plagued his image.

I had dreams of the league,
One day I play Kobe,
I walk up to Puff and he already know me,
Coulda let the dream killers, kill my self esteem,
Or use the arrogance as a steam that power my dreams,
And my ego
—Kanye West on Beyonce’s Ego (Remix)

3. They are extremely talented and extremely successful.
Kobe has won five NBA championships, two NBA finals MVPs, one regular season MVP, four All-Star Game MVPs, and two scoring titles. He’s appeared in the All-Star Game 14 times and made the All-NBA first team nine times. He once scored 81 points in a game and ranks fifth all-time in career regular season points scored. In his heyday, he was as athletic as they come, but now has settled into a wily, smart, and insanely competitive player who makes impossible shots and buzzer beaters. He is routinely described as one of the greatest basketball players of all time and often compared to the legendary Michael Jordan. The dude is good.

Kanye has won 18 Grammy awards and 44 Grammy nominations, has sold over 12 million albums and 30 million digital songs, and has had four #1 singles. He has created some of the best jams of the last decade and single-handedly brought a wider audience to hip-hop, through his infectious rapping style and his production genius. He is widely regarded as one of the greatest producers and rappers of all time. The dude is good.

4. Their unique first names both start with ‘K’ and overshadow their nicknames.
The hip-hop world often refers to Kanye West as ‘Ye or Yeezy, and Kobe is called the Black Mamba (no, not the Black Walnut) from time to time, but their first names as they are just roll off the tongue, leading most to simply refer to them as Kobe and Kanye.

5. They were more cheerful at the beginning of their careers than they are now.
Here’s an interesting comparison. Through the first three albums of Kanye’s career, his production work was happy and upbeat. The 2005 single “Touch the Sky” samples Curtis Mayfield’s triumphant “Move On Up” horn lines, which doesn’t induce any emotions besides sheer joy. That’s a fact. And on 2007’s “Good Life,” Kanye raps about loving life over another cheerful beat.

But then things got darker. Kanye’s relationship with his fiancee soured and his mother tragically passed away, leading to 808’s & Heartbreak, an auto-tune soaked lament about heartlessness, paranoia, cold winters, and locking down love. His 2010 masterpiece My Beautiful Dark Twisted Fantasy followed, which marked a return to rapping, but this time with a palette of self-loathing and doubt, on top of creepy (and awesome) beats.

Kobe had a similar shift in attitude, going from a cheerful kid with an easy smile, to somewhat of an angry curmudgeon. In the following interview from the 90’s, the late Chick Hearn says he’s “never seen [Kobe] get angry” and asks him “Do you ever get mad?” Kobe says “I think it’s important not to show your frustrations.” This is laughable now, considering Kobe’s, shall we say, “fierce” demeanor.

Now, for better or worse, he’s a man on a mission, with no time for those easy smiles. Whether it’s a determination to catch Michael Jordan and win his sixth title, or just plain battle-weariness, he is strictly business when he steps on the court.

6. Many of those who hate them on a personal level still respect their work.
President Obama reaffirmed his negative opinion of Kanye West just this month in an article in the Atlantic, but also stated that his fellow Chicago native was smart and talented. And I can’t even count the number of friends who tell me they hate Kobe Bryant, but begrudgingly admit to his level of talent.

7. They have an incredible work ethic.
Kobe Bryant not only brings it for the full 48 minutes, but he works tremendously hard at improving his game in practice. Kanye West is no different, releasing a constant stream of solo albums, collaborations, guest verses, and producing an insane amount of records by other artists.

Tryin’ to get that Kobe number, one over Jordan.
—Kanye West on Swagger Like Us

8. They are both within two degrees of separation from the Kardashians.
Kobe’s longtime friend and former teammate, Lamar Odom, is married to one of them — I don’t know which one and I don’t care. And Kanye, well…yeah.

9. Despite being the best at what they do, they still have something to prove.

Kanye and Kobe were both born with a fierce competitiveness and a chip on their shoulder. By many accounts, they are the best at what they do, but they are constantly seeking to improve in order to shed any doubt. They are never satisfied.

Aaaannnd, there’s my dose of sports for this music blog. I apologize to those that couldn’t care less, but never fear, there is plenty of good music coming out right now that will be fully covered here, devoid of any athlete analogies.

Related post: “Just Throw This at the End: Kanye West’s Gift for Outros”

2 thoughts on “The Similarities Between Kanye West and Kobe Bryant”