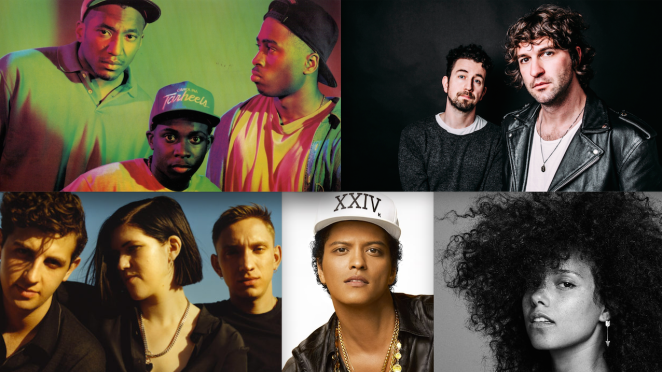 We’re in the home stretch. The Best Songs of 2016 list is coming soon! But for now, let these ten tracks from the last two months hold you over.

Comeback albums are not supposed to be this satisfying. Or smooth, or cohesive, or playful (at times), or important (at other times). But somehow, A Tribe Called Quest pulled it off with panache.

The Tribe got the whole gang back together for their newest album, We Got it From Here, Thank You 4 Your Service. Q-Tip, Phife Dawg, Ali Shaheed Muhammed, Jarobi, Consequence, and Busta Rhymes all make their mark on the album, along with guest contributions from Kendrick Lamar, Jack White, Andre 3000, Kanye West, Anderson Paak, Elton John, and more. But since A Tribe Called Quest’s inception, the highlight has always been the verbal tango between the two frontmen, Q-Tip and Phife Dawg. Most of the album’s tracks feature multiple rappers, but on “We the People…”, Q-Tip and Phife take the keys and run with it. There’s absolutely nothing more pleasurable in the world of hip-hop than Tip and Phife’s chemistry together on the mic. But with such a long (and somewhat acrimonious) period of time since their last album, there was a significant chance that the magic between those two would be gone. But they don’t miss a single (Q-Tip-produced) beat.

On “We the People…”, Tip and Phife trade verses like the old days, but the subject matter is very current. The group directly addresses intolerance that many face today, taking on the part of the oppressors with the chorus: “All you Black folks, you must go / All you Mexicans, you must go / And all you poor folks, you must go / Muslims and gays, boy, we hate your ways.” While the subject remains consistent, the duo’s unique styles still come through. Q-Tip (the philosopher) brings up empty-headed reality shows, but instead of outright demeaning them, he points out their appeal: “VH1 has a show that you can waste your time with / Guilty pleasures take the edge off reality / And for a salary I’d probably do that s— sporadically.” And Phife (the everyman) is always good for some sports-related similes, going after the unprepared haters who are “like a AL pitcher on deck talking about he hittin’“, or how the Tribe at their best are “like Tony Romo when he hitting Witten.”

Phife Dawg passed away earlier this year of diabetes at the age of 45, eight months prior to the album’s release. Not only is the album impressive in its own right, but it’s a fitting, worthy tribute to his memory. R.I.P. Phife, and Thank You 4 Your Service.

2. Japandroids: “Near to the Wild Heart of Life”

I love Japandroids so much, and I’m especially glad to see that my love for them has not faded as I’ve gotten older. The duo’s brand of blistering guitars and impassioned choruses, with talk of fire’s highways and adrenaline nightshifts and hearts sweating, had a potency that hit me particularly hard in my early twenties. Once I became a married man in my late twenties, it became significantly less likely that Japandroids music would resonate with me to quite the same degree. But the minute I heard “Near to the Wild Heart of Life” — their first new music in four and a half years — I could feel that unique visceral excitement coarsing through me, the kind of excitement that only Japandroids can provoke. In fact, the feeling is best summed up by the song’s chorus: “And it got me all fired up to go far away, and make some ears ring from the sound of my singing, baby.” I’m pleased to report that the band’s power does not change with age.

Some artists thrive on change and variety — others have a formula and stick to it. We usually tend to value variety, but when an artist has a formula so airtight and perfect, it can be just as impressive. Oakland’s own Jackson Phillips, who records under the moniker Day Wave, knows exactly what he’s doing when he sets out to create a song. Over the last two years, he’s released numerous singles and EPs featuring his signature sound — hazy, wistful, guitar-based indie pop. “Wasting Time” is cut from the same cloth, but the production is beefed up a bit, giving it a fuller sound than Phillips’ previous work. As usual with Day Wave songs, “Wasting Time” makes you feel things. It’s cinematic, nostalgic, and dreamy.

Mayer Hawthorne, the retro soul devotee, has made a career of mining the depths of 1970s and ’80s funk. He already released a full-length album this year (Man About Town), but just followed it up last month with an EP called Party of One. Weirdly enough, the three-song EP is actually better than the full-length! On the opening track, “Someone Like You,” Hawthorne goes back to what he does best — his signature amalgamation of funk and soul, with a knowing look in his eye.

A year removed from Jamie xx’s impressive solo album, In Colour, the talented producer joins back up with his The xx bandmates, Romy Madley-Croft and Oliver Sims for new single, “On Hold.” Sims and Madley-Croft’s vocals are much more front and center than usual, which caught me off guard at first, but the track has grown on me a lot. Highlight: Jamie xx’s Hall & Oates sample, the computerized voice singing “Where does it stop, where does it stop, where do you dare me to (draw the line).”

No pop star has pulled off a quicker and more complete 180-degree turn in my mind than Bruno Mars. I am not a fan at all of his first album, 2010’s Doo-Wops & Hooligans — “Just the Way You Are” is a little too sweet, and “The Lazy Song” is flat-out terrible, sorry. But he dropped the sweetness and added a dash of swagger and soul on 2012’s Unorthodox Jukebox, headlined by the funk-pop of “Treasure” and the Police-pastiche of “Locked Out of Heaven”. My conversion was complete with the release of “Uptown Funk”, the most perfectly-constructed, toe-tapping, hip-swiveling, nostalgia-inducing pop song of the last 4 years.

When I first heard “24K Magic,” the lead single and title track of his new album, I was a little baffled, to be honest. It’s just an uncanny recreation of early ’80s funk, especially with that heavily synthesized bass. I thought it was maybe too uncanny. But every time the song came on (like when he performed it along with his hype men on Saturday Night Live), I enjoyed it more and more, and wanted to hear it again and again. It’s just way too fun and catchy to deny.

One of the best elements of indie zeitgeist band Dirty Projectors has been the angelic vocal contributions of Amber Coffman. She’s now going solo (with some production work from Dirty Projectors frontman Dave Longstreth), releasing the gorgeous “All to Myself.” Every instrument sounds crystal clear and Coffman’s harmonies are on point, as she sings about finding and thriving in her newfound state of independence.

Dylan Baldi has always had a knack for writing catchy, melodic pop tunes. That knack was on full display on Cloud Nothings’ self-titled album in 2011. But over the course of the next two albums (Attack on Memory in 2012 and Here and Nowhere Else in 2014), Baldi settled into a new level of hard-driving intensity. On “Modern Act,” Baldi puts melody front and center again, but carries over the energy of his most recent projects. “Modern Act” actually gives off a sort of Death Cab for Cutie vibe (with a more gravelly voice), and it’s great.

Conor Oberst takes it one instrument at a time on his latest album, Ruminations. On most of its songs, Oberst sings over either a piano or an acoustic guitar — that’s it. (The stripped-down nature is fairly reminiscent of Neil Young on After the Gold Rush.) “Barbary Coast (Later)” is intoxicating with its repeated chord patterns and Oberst’s poetic, painful storytelling: “Tried to lose myself in the primitive, in Yosemite like John Muir did. But his eyes were blue, and mine are red and raw.”

5. Alicia Keys feat. A$AP Rocky: “Blended Family (What You Do for Love)

“Blended Family (What You Do for Love)” is a slice of no-frills, classic-sounding R&B with a strong drumbeat an incredibly catchy groove. Alicia Keys brings a positive message about using love to overcome the complications of forming new families and having a good step-mother/step-daughter relationship, singing “love could bring us closer than blood.” She tells her step-daughter “I think you’re beautiful, I think you’re perfect, I know how hard it gets, but I swear it’s worth it.”