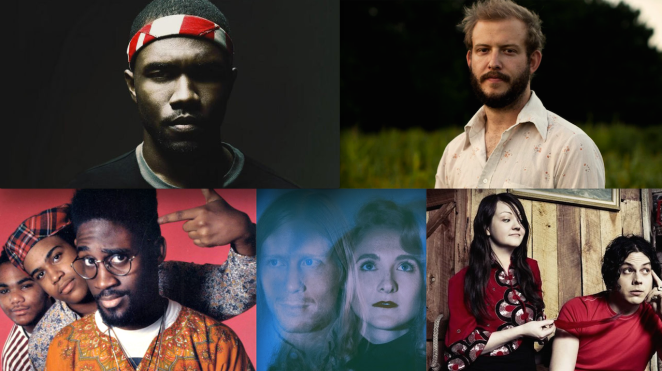 The transition from July to August brought vacations and final exams and a LOT to do, so apologies for no previous July edition of Five Quality Tracks. But never fear — after going over the five tracks from August, we’ll double back to July and make up for lost time with five additional tracks.

Frank is back! It’s hard to believe this actually happened. I still can’t shake the feeling that we’re all living a fever dream and Frank Ocean’s two new albums (yes, two new albums!) will be yanked away from us when we wake up. But my iTunes still has 35 more Frank Ocean songs than it did a couple weeks ago, so it’s real!

Two days after releasing a “visual album” called Endless (a project largely full of vignettes and a smattering of really good, but also really short ideas), Ocean released Blonde, his proper follow-up to channel ORANGE. As a whole, Blonde floats along with less immediacy and fewer hooks than channel ORANGE, but it washes over you with ambient moments of unadulterated beauty, punctuated by bursts of brilliance. “Self Control” can be classified as one of those “bursts.”

On “Self Control,” Ocean opens with a jarring chipmunk effect on his voice before going into his gorgeous, raw croon over a rhythmic electric guitar groove. Ocean’s ability to create a thick, fully realized atmosphere in the studio is enough to put him in the upper echelon of songwriters, but then he has that extraordinary voice to go on top of it. He’s a talented dude.

The song then gives way to an absolutely stunning chorus of Franks singing “I I I know you gotta leave leave leave.” It’s the kind of thing that makes you stop in your tracks and pause to take in the beauty.

Frank is back. Let’s enjoy it.

In 2007, Justin Vernon first burst on the scene with his bare-bones, acoustic debut For Emma, Forever Ago, a record that I consider to be one of the best of the last decade. As has been told and re-told on many a music blog, he recorded the album in a secluded Wisconsin cabin during the dead of winter, and the exquisite, spare folk perfectly reflects the setting. It’s now been nine years, and Vernon has evolved significantly. His last album, 2011’s Bon Iver, employed much more instrumentation than For Ever, Forever Ago, while still conveying a similar feeling. But all signs point to a reinvention on his forthcoming third album, 22, A Million.

I should pull back a bit by making clear that much of the Bon Iver trademarks — the wistful sentiment; Vernon’s pained, but gorgeous falsetto — are still there. But the production has shifted rather drastically from nine years ago (not to mention the track names). Take “10 d E A T h b R E a s T ⚄ ⚄” for example (I wasn’t kidding about the track names). My sister described the turbulent, roiling production as “that sound you hear when you only have one window rolled-down on the freeway.” She’s not incorrect. It’s quite a shock if you’re used to “Flume”.

Since For Emma, Vernon has collaborated multiple times with one high-profile envelope-pusher: Kanye West. After working with Kanye on “Lost in the World”, “That’s My B****”, and especially the brash, strident Yeezus track, “Hold My Liquor”, it’s hard not to attribute at least some of Vernon’s recent experimental tendencies to Kanye’s influence. All I know is if Kanye has heard “10 d E A T h b R E a s T ⚄ ⚄” yet, I guarantee he’s obsessed with it.

But that’s a lot of talk about a track that I’m not highlighting. The song that has impressed me most is “33 “GOD””. It actually recalls the gorgeous, emotional songwriting on Vernon’s first two albums, but with his 2016 ear for experimental production flourishes. It’s odd, exciting, and devastatingly beautiful. It’s thick with every sound imaginable, often layered on top of each other like an impenitrable wall, but I swear I still hear a long-lost banjo from 2007 in there.

Rap is having an extremely strong year, with young MCs like Vince Staples, ScHoolboy Q, and Young Thug redefining the genre and expanding its possibilities. But sometimes, it’s nice to taste the sweet flavor of old-school hip-hop, and who better to bring that flavor than De La Soul? The legendary NYC rap group dropped their first album in 12 years, a diverse and exciting record called and the Anonymous Nobody… There are plenty of complex and unique songs on the album, but the catchiest by far is “Pain.” The beat is laid back and satisfyingly classic-sounding, complete with a danceable bass line and percussion, syncopated guitar, and a 1970’s-funk-style gospel chorus. Snoop Dogg comes in to add his voice to a song about how, in the end, “pain will make it better.”

Indie pop has sort of lost its cache among music critics, but it would be an unfortunate mistake to overlook a band like Tennis, who executes the genre so well. They first came to my attention with their single “Origins” from 2012, and have consistently delivered pop that adeptly hearkens back to the stylings of 1960’s Supremes-like girl groups.

“Ladies Don’t Play Guitar” revolves around a shuffling beat, warbly piano chords, and Alaina Moore’s sweet melodies. Moore — who I actually had the pleasure of interviewing a few years ago — had this to say about how the subject matter of the song came about.

I’ve been pushing myself to present a stronger point of view lyrically and to make more assertions about the way I feel constricted or shaped by gender, like an invisible hand that guides the way I work and carry myself, especially within the music industry. This song was my starting point. I took a very intentional break from songwriting until I felt like I had something to say again. Now I do.

There’s no word yet on their upcoming album, but I can’t wait.

I miss the White Stripes. Fortunately, there is some respite for our White Stripes thirst in the form of a previously unreleased track called “City Lights,” which will be featured on Jack White’s forthcoming collection of existing odds and ends, Jack White Acoustic Recordings 1998-2016. I would have loved to have some more ball (and biscuit)-busting blues rock, but beggars can’t be choosers, and “City Lights” is a gem that we’re lucky to have. The track features little more than White’s vocals, an acoustic guitar, and a subdued shaker, no doubt played by Meg White (I miss you too, Meg!). It’s a delicate acoustic song, contemplative and pure.

Josh Tillman, a.k.a. Father John Misty, is witty, poetic, whip-smart, and exceedingly cynical. He cloaks everything he does in so many layers of irony that it’s hard to tell when he’s actually being earnest, or when it’s a parody (I think “I Went to the Store One Day” from last year’s excellent I Love You, Honeybear is earnest, but maybe that’s just what he wants me to think).

Originally released as a Soundcloud throwaway, “Real Love Baby” gained enough traction that it was released as a proper single a few weeks later. It is, no doubt, the most straightforward track associated with Tillman’s “Father John Misty” persona. He sings, “I’m in love, I’m alive / I belong to the stars and sky / Let’s forget who we are for one night,” as the music under him sounds like a John Lennon demo meeting the Doobie Brothers. It’s hard not to shake the feeling that “Real Love Baby” is just an elaborate joke played on us all, but who cares when it sounds so good?

Wilco surprised everyone last year with an album out of nowhere, hilariously titled Star Wars. I wasn’t much a fan of the album, so much so that I completely forgot it existed until a friend reminded me. It just didn’t have very many tuneful songs on it, and I think Wilco is at their best when they have tunes, you know what I mean? “If I Ever Was a Child,” on the other hand, is very promising. The “straightforward” description I tacked onto “Real Love Baby” can be similarly applied here, but subtract all the irony. It’s short and sweet, subtle and sublime. No one does campfire Americana better than Wilco.

ScHoolboy Q’s rise has largely been overshadowed by his Top Dawg Entertainment colleague, Kendrick Lamar, but sleep on him at your peril. His new album, Blank Face LP, is full of sinister bangers, including the Kanye-featuring “THat Part,” but I think my favorite of the bunch is “WHateva U Want.” It’s deep, dark, and gut-punchingly catchy. The production almost reminds me of a Pharrell Williams beat if he channeled the anger he felt during his “Blurred Lines” deposition. ScHoolboy Q snarls throughout, but also lets the beat ride and breathe.

Hailing from Philadelphia, Beach Slang play punk rock with the biggest possible heart on their collective sleeve. “Punks in a Disco Bar” makes you feel young and alive.

The word that most accurately describes much of The Amazing’s catalog is “glacial.” When I’m listening to “Floating,” I feel like I should be on a brisk walk on the Icelandic coast, looking out over the frigid ocean.