Featuring discussions of the Strokes’ career trajectory, the single most important quality of a great pop song, and more. 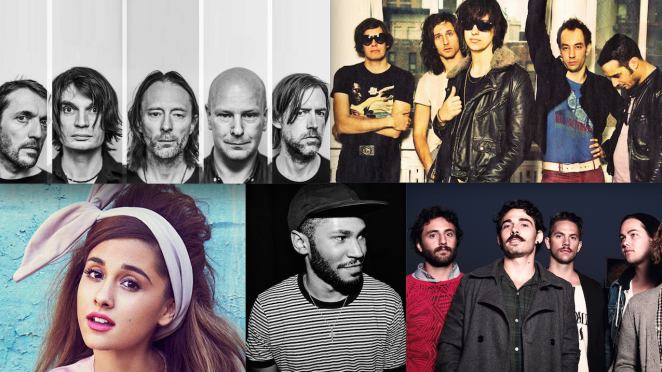 Much of Radiohead’s music takes a while to sink in. It took me a repeated listens to fully appreciate the intricate brilliance of OK Computer and Kid A, and the band’s newest surprise album, A Moon Shaped Pool, is proving to be a slow-burner as well. There are exceptions, however. In Rainbows was an album that revealed its pleasures immediately. While most of Kid A took some time, opening track “Everything in its Right Place” was spine-tingling from the start. Similarly, the lead track on A Moon Shaped Pool, unlike the rest of the album, was instantly engrossing.

“Burn the Witch” is eerie, full of an anxious energy that boils over by the time we reach the end. The song highlights multi-instrumentalist Jonny Greenwood’s proclivity for discordant string arrangements. Greenwood’s strings were almost like another full-bodied character in films such as There Will Be Blood and The Master. Greenwood uses the same pizzicato technique on “Burn the Witch,” and as a result, the song sounds huge, important, and cinematic in scope. It forges forward with Thom Yorke’s ethereal voice floating on top until about the three-minute mark, when it kicks up a notch and builds to a fever pitch. Jillian Mapes of Pitchfork said it best when she called it “simultaneously unsettling and gorgeous.” The lyrics match the sonic paranoia — “Stay in the shadows, cheer at the gallows,” “Avoid all eye contact, do not react, shoot the messengers,” and “This is a low-flying panic attack.”

Radiohead aren’t the only indie rock staple making a surprise appearance in 2016. The Strokes are back, and they apparently like each other enough now to (a) be in the same room for an endearing interview, and (b) release new music! Their new EP, Future Present Past, brings us three songs that fit the respective descriptors contained in the EP’s title: “Drag Queen” is the future, “OBLIVIUS” is the present, “Threat of Joy” is the past.

Let’s take a moment to consider the trajectory of the Strokes’ output. Their first two albums are excellent. Their third album is intriguing but ultimately a severe misstep. And their two most recent albums, while promising and at certain points really good, are slightly better than “mediocre.” Even though I like Angles and Comedown Machine, there’s no way to overlook the clear downward trend, as visualized by this exceptionally accurate line graph. 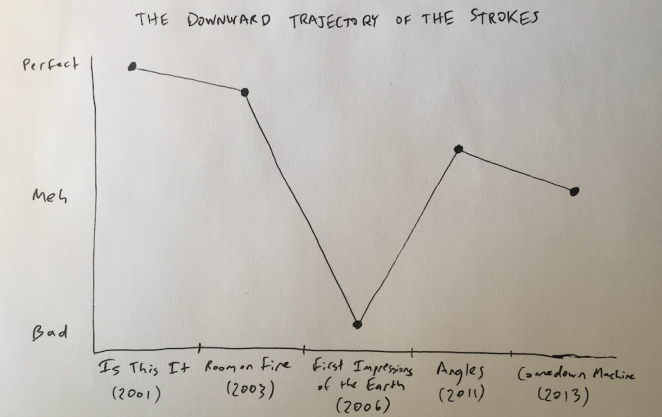 When it comes to the Strokes, the past is clearly better than the present, and the future looks to be bleak. As a quick refresher: “Drag Queen” = future, “OBLIVIUS” = present, “Threat of Joy” = past. Based on the data, we would expect “Threat of Joy” to be perfect, “OBLIVIUS” to be “meh,” and “Drag Queen” to be… well, probably not great. As it turns out, I really like all three tracks. But “Drag Queen,” a.k.a. “the future,” is the one that made the biggest impression.

“Drag Queen” is built on a dark, repeating synth chord and some often unintelligible but intriguing vocals from Julian Casablancas. While this new and fresh keyboard-based sound is certainly futuristic by the Strokes’ guitar-rock standards, it calls back to 1980’s new wave (Casablancas actually opens the song with the line “80’s people dancing, ooh, I’ma get it right”). Specifically, the sound reminds me of Dan Boeckner, best known for fronting Wolf Parade, who has infused new wave tendencies into much of his music — listen to Boeckner’s similarly dark synths on Divine Fits’ “My Love is Real” or Operators’ “Cold Light”. In the past, I’ve enjoyed Casablancas more when he’s in crooner mode (a la “Under Control”), but his random, odd vocal inflections here are sort of captivating — after the first chorus, the way he squeals “We all wonder what you fight” at 1:52, or the interesting melody of “I did not know that, bring you back to my past” at 2:30. The rest of the band is on point here as well. I’m very glad to have the Strokes back in my life.

The best pop music is exhilarating. Pop is at its absolute peak when it gets your heart and mind racing; when you can taste the excitement on the horizon. The best pop song of this decade so far, Katy Perry’s “Teenage Dream”, thoroughly captures this exhilaration. “Into You” goes after the same feeling, and succeeds tremendously. It’s not really a surprise, either. Max Martin, the pop-producing genius behind “Teenage Dream”, “Blank Space”, “Can’t Feel My Face”, and countless other hits, has also graced us with “Into You.” I don’t really endorse Ariana Grande’s donut-licking ways, but she sure knows how to surround herself with the best pop minds. “Into You,” with its sharp synth riffs, is what endless possibility sounds like. It’s invigorating.

4. Kaytranada feat. Phonte: “One Too Many”

Kaytranada, born Louis Kevin Celestin, is an electronic/soul/funk producer from Montreal by way of Haiti. He gained notoriety through a collection of Soundcloud uploads, and has now released his debut album, 99.9%. “One Too Many” is a vibrant, pulsing track that straddles the line between house and hip-hop. It’s got a danceable, summery beat, a catchy guest verse from North Carolina rapper Phonte, and a rhythmic chorus that gets in your head and stays there.

Local Natives, from the Silver Lake neighborhood of Los Angeles, released what I consider to be one of the 10 best albums of the decade so far, Gorilla Manor, in 2010 (favorite tracks, depending on the day: “Wide Eyes” and “Cards & Quarters”). Their harmony-infused brand of indie rock is right up my alley. The songwriting is consistently strong. On new single “Past Lives,” the band members shows off their songwriting chops — while the melody and chords stay more or less the same, the instrumentation changes constantly, especially the percussion, which builds and fades and sets the fluctuating intensity level throughout. The song is polished in its conception but raw in its execution, giving it a vitality that it wouldn’t otherwise have.

This was an especially strong month, so here are five honorable mentions: “No Problem” by Chance the Rapper featuring 2 Chainz and Lil Wayne, “Timmy’s Prayer” by Sampha, “Timeless” by James Blake, “Girls @” by Joey Purp featuring Chance the Rapper, and “Daydreaming” by Radiohead.