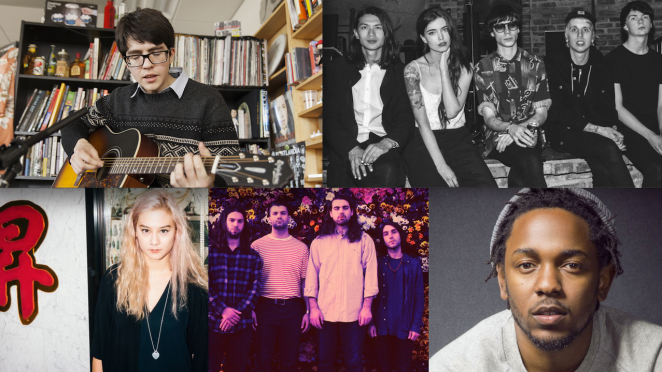 It’s an indie rock/pop kind of month! Except for Kendrick.

Car Seat Headrest is my current obsession. The band’s mastermind, Will Toledo, has been making home-recorded music since 2010, but after almost 6 years, he’s finally getting some much-deserved attention. Last year’s Teens of Style was #17 on my Best Albums of 2015 list, but after listening to it a lot over the past month or so, I regret placing it so low. In retrospect, it was one of the 5 best albums of last year. Despite the record’s lo-fi, muddled production, Toledo’s songwriting ability and knack for melody still shone through (especially on “Times to Die”).

In May, Car Seat Headrest will release Teens of Denial, the follow-up to Teens of Style, and I can’t freaking wait. With recognition comes access to a real recording studio, and Toledo is taking full advantage on his new singles. He first released the 8-minute epic “Vincent”, but then topped it with “Drunk Drivers/Killer Whales.” It’s a sobering song that compares drunk drivers to, you guessed it, killer whales, but it doesn’t do so in any kind of preachy way. Toledo makes his faults and rationalizations abundantly clear, but advocates the song’s subject to listen to the voice in your head: “But you know he loves you, and he doesn’t mean to cause you pain. Please listen to him, it’s not too late. Turn off the engine, get out of the car, and start to walk.” The music itself is powerful — it’s pretty by-the-book indie rock, but so well-executed, paced perfectly, and with an excellent melody. Toledo’s voice is like a cross between Julian Casablancas of the Strokes and Ray Davies of the Kinks. With some people, you can instantly tell whether they have that certain songwriting “spark” — the spark that takes what could be “good” songs to “great, stay-in-your-head” type songs. Toledo has that spark.

The Sun Days, all the way from Gothenburg, Sweden, make jangly, summery pop fit for California beach-goers. I know that I overuse this trope, but I don’t care — this is a “roll down the windows of your car” type of song. Lead singer Elsa Fredriksson Holmgren’s voice goes straight for the stratosphere on the main hook, singing with all the assurance in the world: “You don’t need to be them!”

3. Japanese Breakfast: “Everybody Wants to Love You”

The jangly pop doesn’t end there. Michelle Zauner, the woman behind Japanese Breakfast, wrote and recorded most of the songs on her debut album Psychopomp in her bedroom, trying to break through a period of writer’s block. “Everybody Wants to Love You” is a doe-eyed, heart-on-sleeve plea for a lover — “Will you lend me your toothbrush, will you make me breakfast in bed?” The melody and instrumentation make for an impeccable pop showcase. And at a brisk 2 minutes and 12 seconds, the song is a beautiful rush of color and emotion.

Turnover, the quartet from Virginia Beach, released a great new single called “Humblest Pleasures”, but I like the B-side even more, a dreamy track called “Change Irreversible.” The reverb-drenched Smiths-like guitar is distinctive, but allows room for the clear vocal melody to get through. The song’s themes touch on regret and gloom: “Disappointment waiting for me, like a hunger in the morning” and “If you’re in the dark enough, your eyes adjust.”

As if we needed any more confirmation that Kendrick Lamar was a genius. Less than a year after the release of To Pimp a Butterfly, Kendrick’s sprawling, challenging, bold masterpiece, LeBron James basically convinced Kendrick’s team to release the untitled tracks that he’s graced us with on various late night TV performances, from Colbert to Fallon. The result is an album aptly titled untitled unmastered, consisting of eight of Kendrick’s leftovers. The fact that these are “leftovers” is staggering — untitled unmastered is, quite possibly, the best album of 2016 so far. The musicianship, swagger, and bars are on point from top to bottom. It’s compact and breezy, standing in total contrast from To Pimp A Butterfly. And honestly, it’s almost as great as last year’s classic.

I could have chosen any number of tracks here, from the funky “untitled 8” to the bumping “Levitate, levitate, levitate, levitate” chorus on “untitled 7,” but I can’t get enough of “untitled 6.” The production, produced in part by Ali Shaheed Muhammed, formerly of A Tribe Called Quest, has a propulsive, jazzy beat, with a lot of snare rim hits, flutes, and bells. It wouldn’t sound out of place as the backbone to a late-60’s Van Morrison song. Cee-Lo features prominently on the track, providing crystalline melodies, singing the main hook (“I can explain / Let me explain!”) and other choice lines: “I’m bizarre, avant-garde / both sides of me are evenly odd.” Kendrick Lamar is currently the greatest rapper on the planet, hands down.