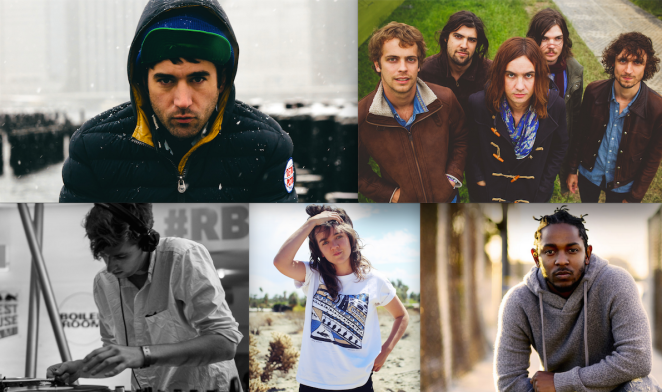 I’m not exaggerating when I say that I think March was the best month for music in years. It was jam-packed. It took everything in my power to keep this post to just 5 songs.

Sufjan Stevens’ penchant for simple, clear beauty is unparalleled. On his latest album, Carrie & Lowell, Stevens bares his soul about coping with the recent death of his mother, who struggled with mental illness and abandoned him and his family when he was a year old. He ended up spending three summers with his mother (Carrie) and stepfather (Lowell) in Eugene, Oregon, which provided the only real memories that he has of Carrie. Carrie & Lowell opens with “Death With Dignity,” an incredibly pretty song that sets the stage for the emotional depth to come on the album. “Spirit of my silence, I can hear you, but I’m afraid to be near you, and I don’t know where to begin.” The song is full of lyrical gut-punches: “What is that song you sing for the dead?”, “I forgive you, mother, I can hear you, and I long to be near you, but every road leads to an end.”

As far as the music goes, Stevens does what he absolutely does best — laying his quiet, haunting voice over a finger-picking acoustic guitar (and just the right amount of piano touches). At the end, the instruments cut out, leaving a choir of Sufjans, blending their voices together mutedly from a distance. The moment is perfect, the song is perfect, the album is perfect. No hyperbole here. The album really is perfect. Check it out.

Now that we’ve heard Sufjan Stevens at his absolute peak, time to do the same with Jamie xx. You may know Jamie as the producer and third member of The xx. He has a solo album coming out this year, which will thankfully include “Loud Places,” featuring Romy Madley-Croft, who you’ll also recognize from The xx. “Loud Places” is one of those rare songs that immediately feels special. No song has so thoroughly enveloped me since the first time I heard “Jóga” by Björk nearly three years ago. The production is subtle, but there’s so much going on — drum beats coming in and out of focus, little guitar licks, wistful piano chords, all manner of random percussion instruments, and most importantly, a triumphant chorus of voices that made me smile ear to ear because it was so perfect. Nobody matches Jamie xx’s ability to fill electronic sounds with so much warmth. I insist that you listen to the song with headphones or really good speakers. Just let it take you over a few minutes.

Tame Impala started with a fully formed sound — the heavy guitars of Led Zeppelin + the psychedelia of Pink Floyd + a voice like John Lennon. Since then, they’ve evolved, incorporating more keyboards and bringing more unique ideas, while still maintaining the same booming sound and psychedelic tendencies. “Let it Happen” will be the opening track of their third album, and it’s a beast. It almost has a disco feel, with its continuous, thumping bass drum, but it’s much more dreamy and nuanced than a Bee Gees song. The song is amazing enough at the beginning, but the ending takes it to another level. After a long breakdown, a satisfying beat kicks in at 5:06, joined by lead singer Kevin Parker’s catchy harmonies at 5:29, and then a huge guitar riff at 6:15.

I’m telling you, this month provided an embarrassment of riches. Courtney Barnett, who I’ve already raved about, has a new album out that almost channels Nirvana due to its loud, arresting guitars and Barnett’s hilarious turns of phrase about mundane, but highly relatable life situations. On “Depreston,” she keeps the turns of phrase, but ditches the loud guitars in favor of something more introspective and beautiful. Barnett talks about looking for a house to rent in a depressing suburb, telling us about how “Now we’ve got that percolator, never made a latte greater, I’m saving twenty-three dollars a week.” As she looks around the house, she finds relics of the previous elderly owner, who had a “handrail in the shower, a collection of those canisters for coffee tea and flour, and a photo of young man in a van in Vietnam.” The incredibly specific lyrics could seem weird in another context, but Barnett adeptly uses these thoughts to paint a picture that captures her wistfulness and anxiety over growing up.

Kendrick Lamar’s ambitious new album, To Pimp a Butterfly is dense, bursting to the seams with ideas. Kendrick raps over improvisational jazz, uses as many different-sounding voices as a Sesame Street skit, and even has a posthumous two-way conversation with Tupac. It has been slow to grab me, but with every listen, I come closer to embracing it as a classic. One song that immediately stood out from the first listen was “King Kunta.” The g-funk bass anchors the song, making it impossible not to bop along to the beat, as Kendrick raps about how he’s “mad, but [he] ain’t stressin’.” In the current hip-hop landscape, Drake has the catchiest hooks, Kanye has the most interesting idiosyncrasies, but Kendrick has the best sense of self, which makes To Pimp a Butterfly extremely refreshing.